As much as midlevels hate to admit it, the hierarchy of medicine exists for good reason. Simple common sense dictates that someone with more knowledge, training, and experience is going to be better than someone with less of the aforementioned qualities. You wouldn't expect a lowly private who just finished boot camp to question a brigadier general's orders, would you? In the same vein, it would be unimaginable for a midlevel psychiatric-mental health nurse practitioner who likely obtained their degree online to second-guess the medical decision-making of a fellowship-trained, board-certified attending psychiatrist with years and years and thousands of hours more of training. Don't believe us? Here, take a second to appreciate the following chart before continuing.

Sorry, but since when did we label and diagnose patients based solely on family history? If that were an accepted method of practicing medicine, anyone and their dog could be a psychiatrist. Risk factors are just that - risk factors!

Look, psych lady, the hospital psychiatrist isn't "stuck" on an SSRI - they're prescribing what happens to be the first-line pharmacotherapy for both depression AND generalized anxiety disorder. Instead, you want to start this poor 14-year-old girl on not one, but two powerful antiepileptic/mood-stabilizing drugs - lamotrigine (Lamictal) and oxcarbazepine (Trileptal) - while simultaneously arguing with a straight face that they have a more favorable side-effect profile than SSRIs because you read that in a book somewhere? Oh, and did we forget to mention that even if this patient did have bipolar disorder, neither of these two drugs would be considered first-line treatment, and Trileptal in particular would be a shitty choice anyway? What in the actual nutty fuck?! On top of all that, it would be remiss of us not to mention that AEDs have been associated with a potentially increased risk for suicidality. Clearly, this is just what this already-suicidal teenage patient needs!


Last but not least, however, is this PMHNP's downright absurd suggestion that the patient be started on a medication just because a family member took it. "It worked well for Dad, it should work on you!" What the fuck? Since when did anyone prescribe a medication just because their parent used to take it? What happened to prescribing a medication based on...actual medical decision-making? This train of logic is more alien to us than the UFOs in Roswell.

Even more concerning, however, is this PMHNP's specific choice of imipramine. As our more pharmacologically astute readers will appreciate, imipramine belongs to the class of tricyclic antidepressants (TCAs), which have largely been replaced over the years by newer classes of medications (SSRIs, SNRIs, etc.) in clinical practice. TCAs are notorious in the realms of emergency medicine and toxicology for their deadly effects in overdose situations. Do you hear that sound in the background? Why, it's our poor patient coding after going into a wide-complex ventricular tachycardia due to sodium channel blockade from a massive TCA overdose. Nurse Williams, please give the patient 2 amps of bicarbonate, stat!

Now, it wouldn't be any fun if we didn't take some time to examine Ms. Williams' credentials. Lucky for us, this PMHNP makes it easy - she's the "doctor" and owner of "Nirvana Mental Healthcare Services" in Roswell, New Mexico. Take a gander at her website, which, depending on your perspective, is either a war crime against modern web design or an aesthetic masterpiece worthy of a Geocities page circa 1997.

According to Ms. Williams' CV page, which is rendered in a font that causes us to develop acute suicidal ideation, she obtained her DNP-PMHNP from Brandman University (now known as UMass Global) in 2016.

Assuming entry at the BSN level, the Brandman DNP program requires a total of 73 credits. That's plenty of time to learn how to mismanage comorbid psychiatric conditions such as depression, anxiety, and bipolar disorder in classes such as "Complex and Chronic Problems in Psychiatric and Mental Healthcare" and learn how to prescribe outdated drugs like imipramine in "Psychopharmacology Across the Lifespan". 1,020 "precepted clinical practicum hours" later, you're ready to graduate and open your clinic in the full practice authority state of New Mexico! 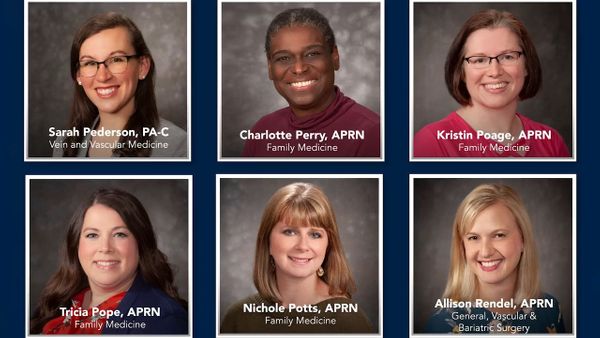 Not a good look for the University of Kansas Health System.

It's not like hypokalemia can be dangerous or anything.