In this now-deleted and very classy Instagram video originally posted by Ageless Aesthetics, a "med spa" operated by two nurse practitioners in Indianapolis, Indiana, owner and FNP Shelley Clayton along with DNP Abbie Bledsoe demonstrate their, ahem, decidedly unsterile approach to liposuction. How many transgressions of sterility can you spot? Let's make a list:

And no, as much as we all love Figs, they are not a substitute for sterile surgical garb.

It goes without saying that liposuction is very much an invasive surgical procedure, and should only be undertaken by qualified physicians with appropriate training, e.g. residency or fellowship in a relevant field such as plastic surgery, dermatology, cosmetic surgery, etc. This is common sense - after all, you're sticking a surgical tool deep into someone's subcutaneous tissue! Indeed, when liposuction is performed by unqualified practitioners in unclean conditions, major complications up to and including death can occur; "the public perception of liposuction as minor cosmetic surgery fails to consider the possibility of major complications with potentially fatal consequences."

Of course, having already put their unsterile feet into their unsterile mouths by posting the above video, Ageless Aesthetics was forced to double down on its stellar surgical hygiene when people started calling them out. Aseptic? "Not a surgery"? As if opening just the skin and not the fascia makes it magically OK and safe from infection? You really want to claim that a T-shirt top with a scrub bottom and no mask is "aseptic technique"? What in the actual fuck? If a medical student tried to pull that shit in an operating room or procedural setting, he/she would be eaten alive by the scrub nurse / surgical tech. Hell, if there's one collective memory shared by all medical students and graduated physicians, it's getting chewed out in the operating room after breaking the sterile field. Let's give these two NPs a refresher on what asepsis is, because apparently they didn't learn it during their rigorous online NP curriculum:

Surgical asepsis is the absence of all microorganisms within any type of invasive procedure.

Wearing sterile surgical attire (sterile gowns, closed gloving, and masks) and PPE is essential to keep the restricted and semi-restricted areas clean and to minimize sources of microbial transmission and contamination. It is important to minimize the patient’s exposure to the surgical team’s skin, mucous membranes, and hair by the proper application of surgical attire.

Similarly concerning is the fact that these nurse practitioners are doing liposuction, which as mentioned previously, is a surgical procedure. Are nurse practitioners doing surgery now? This raises all sorts of questions about scope of practice and education. A deep dive into both FNP Shelley and DNP Abbie's credentials doesn't reveal much, if any surgical or liposuction-specific training at all.

Interestingly, neither of these midlevels' educational profiles make any mention of training in liposuction. We're going to hazard a guess that neither the FNP program at Chamberlain University nor Indiana State University include comprehensive training in general surgery or liposuction. We're also pretty sure that there weren't many patients who came in to the emergency department or ICU for a stat liposuction. Maybe the babies in the NICU needed a neonatal tummy tuck? Also, if she hasn't already, Shelley should probably renew her BLS and ACLS certifications - what if a patient suddenly codes during their lipo?

Even more concerning are the licensing shenanigans that apparently make this whole operation possible. In Indiana, which is a reduced-practice state, midlevel nurse practitioners must have a collaboration agreement in place with a supervising physician. A search of the Indiana Professional Licensing Agency shows that FNP Shelley, along with DNP Abbie, have a collaborative relationship with a physician by the name of Martial Knieser, MD. It would appear that Dr. Knieser specializes in pathology, which, needless to say, is very different from surgery and liposuction. Oh, well. At least dead bodies make for great liposuction practice? Gotta make sure ole' Grandma has an hourglass figure before the funeral!

If you're as pissed after reading this article as we are after writing it, we leave you with the following call to action, courtesy of an anonymous Redditor.

Gain of function? More like loss of brain function. 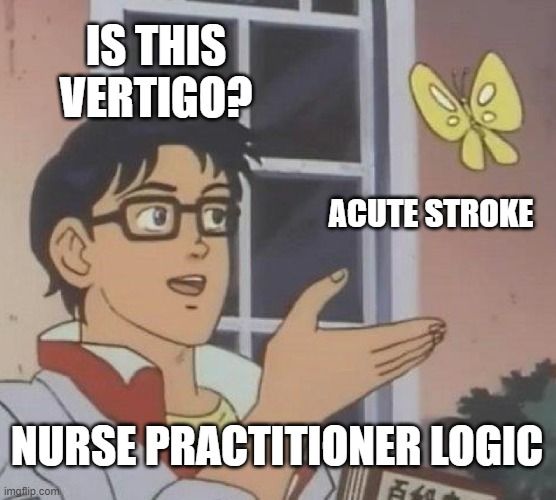 Why give TPA when you can give Antivert instead?